Coming to you from *clap clap clap clap* deep in the heart of Texas! I’m taking a rest day in Fredricksburg; though I’ve only been moving west for 2 days, I put a lot of miles and saddle time in kicking around Austin.Some impressions, and a more detailed chronology below the fold.

The experience so far has re-affirmed that, for me, the best way to really see (and hear and smell & that’s important) the world I’m moving through is pedaling along on a bike. Petrichor, the repeated kee-ah of frisky red shouldered hawks and small wildflowers right on the road margin are all things that are tougher to take in when one is moving faster. A convertible or a motorcycle might do it, but for me it’s all about the bike. On earlier rides I’ve found strangers consider me approachable – perhaps a “dude is probably crazy, but good crazy” vibe? Put a wee adventure teckel in a basket behind you and approachability becomes sheer Lotte-animal attraction.

The bike has been performing beautifully. It’s a good solution to hauling an extra 16-20 pounds of dog and dog food and probably 7 or 8 of camera, lenses and electronics. It’s not fast up hill but it’s geared perfectly – I just downshift and goooo slooooow.

I left NH a week and a half ago in a rental car full of bike, Lotte & me. A snowy night in Harrisburg was so generic cheap motel road vibe that nothing about it registers at this point. Next overnight was Knoxville, where I discovered Lema’s World Famous Chittlins, and her dang good catfish sandwich, too. I was concerned – my room faced a steep off ramp and as I had my dinner, I could hear truckers hitting the jake brake as they came off the interstate. Happily, once my head hit the pillow, I didn’t hear anything until the next morning when it was up and out to Texarkana. 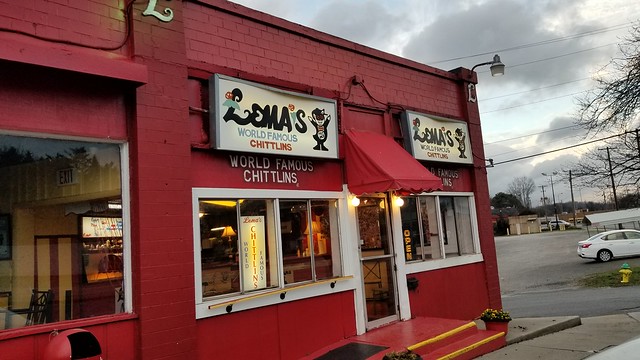 Driving the interstate I was struck, again, by the regularity of the whole thing. An interchange populated with 2 – 20 of the same gas stations and motels, 10 to thirty miles of driving, another damn near identical interchange, and so on. It’s simultaneously comforting in a world without end sense, and scary – what if this is the Stephen King/Twilight Zone exit? Mostly though, I was struck by the vulnerability of all the supply chains and assumptions and business models that don’t seem to be ready for what’s coming down the pike at us. Texarkana to Austin was a breeze. I’d looked at the weather forecast for Austin while I was still in Knoxville; a couple nights of hard freeze were predicted. Ugh – I booked an Airbnb – no reason to start an adventure miserable. There’ll be time for Type 2 fun later. We rolled into Austin’s East side Sunday afternoon (3/3 for those keeping track) and got unloaded and settled. I spent time Monday and Tuesday with my Dad; he’s at an assisted living facility on the far west side of town. Tuesday afternoon the rental car went back, Wednesday morning the bike got loaded up and off we went to McKinney Falls State Park. My original plan had been to spend a few days cycling around Austin to warm my legs up then light out for the territories mid week. The cold snap and an excellent opportunity to hang out pushed the schedule back a bit. My general return-the-car/cut-the-cord timing was optimal in an odd way: I’ve mentioned that the motto for the trip is “M’allé couri dans deser”; starting on Mardi Gras and Ash Wotan’s Day? Ideal. Two overnights at McKinney Falls with a 27 mile putter around town ride on Thursday, and then we moved camp 30 miles to Emma Long City Park. Another timing note – I’d managed to show up in Austin just as SXSW was getting underway, so lodging of all kinds, including tent sites, was tough to come by. A note for bicyclists: City Park Road coming off 2222 is steep. I don’t want to say a double digit percentage grade, but it would not surprise me. 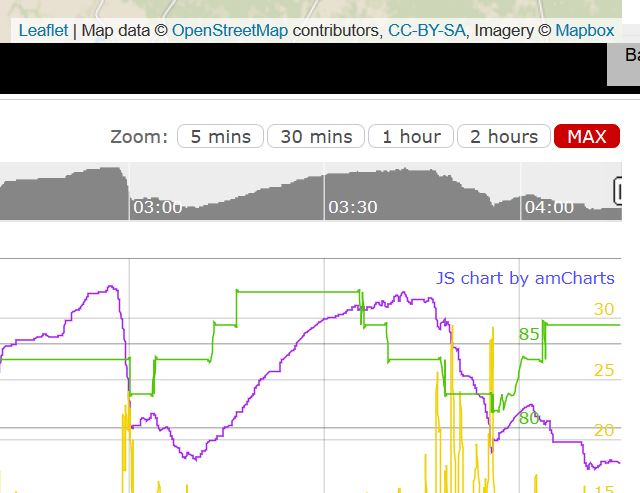 That near vertical profile at 3:00. City Park Road.

Saturday night was the excellent opportunity I referred to above. Ultraromance, Goodolenam and company had a film premier scheduled. Away to the East Side! Before the evening’s festivities I had a fantastic get-together with friends A & V: burgers, beer and excellent talk.

Today we got to hang out with @drhypercube and known internet celebrity Lotte before they began their bicycle journey out to West Texas (and beyond!). Swipe to see John’s amazing raccoon skull-shaped tail light (courtesy of his son’s three-D printing wizardry) and V looking extremely cute with Lotte. What a delight to have friends who follow their dreams. ❤️

A nice coast downhill to Pedernales St. and it was, as L would say, my tribe. Bike hobos, WTF Bike Explorers, Matt from Crust Bikes – a great crowd and great fun.

Great fun, followed by a late night ride back to camp. Once we got up City Park Road again, the view from the top of the ridge was spectacular. We wheeled into camp pushing midnight; Lotte was asleep at the bottom of the sleeping bag in seconds.

Sunday was the first real day on the road and it was tough. DST meant a lost hour and it was steep getting out of Austin and onto 690 – 4 lanes of speeding traffic. Finally we made it onto some less traveled, but still “rolling” ranch roads. It was a 52 mile day, I drank 3 1/2 quarts of water and i sweated and wiped the sunscreen off my face *wry grin*. But it was worth it. At about 6:30 we pulled in to or Warmshowers spot near the Pedernales River. And what a spot!! 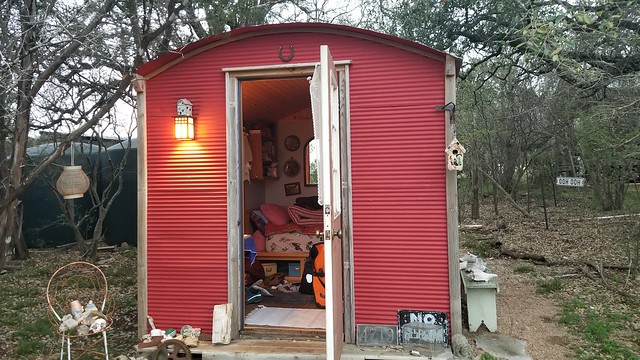 I had a hot shower, said goodnight to my host, and slept 12 hour straight. The next morning I made some coffee, then said yes to a breakfast invite. Eggs, bacon, grits, toast, avocado, fruit, hell yes. Over breakfast I mentioned to my host that I was thinking I’d find a cheap motel room for a couple nights in Fredricksburg and take a rest/laundry day. She immediately gave me the name and number of someone who owns an inn in town and who has been known to give cyclists a spare room to crash in. I called as soon as I had cell signal and once again my timing was sub-optimal – it’s spring break and he understandably is not in a position to give space away. But he said he’d figure something out – tent space, the floor of a conference room, something. It was a nice ride across the Hill Country – sandhill cranes, kestrels, Monarchs, Suffolk sheep, longhorns of course, wildflowers – and we pulled into the Inn at a reasonable hour. Went to the front desk and introduced myself. The person at the desk called the owner (my contact) and somewhere in there “I’m the Warmshowers guy” morphed into me wanting a shower. Word came back that a shower would mean taking a room at a $veryreasonableprice. Sign me up! So to bring this absolutely current, pizza and beer last night, good night’s sleep, laundry done (they have guest laundry facilities!!), blog post nearly done and in a few minutes, Lotte and I are off to stock up on ramen, visit Opa’s Smoked Meats across the street and unkink a bit.

3 thoughts on “Report from the road!”