This is the peanut butter cup of Biodiversity Heritage Library serendipity – two wonderful things that are even better in combination. Via the BioDivLibrary Flickrstream, the Album of Abyssinian Birds and Mammals From Paintings by Louis Aggasiz Fuertes.

Fuertes, for those who don’t know him or his work, was an ornithologist and painter. I’ve loved his art since I first encountered it (I was maybe 10 years old?) in a coffee table book that was, at that point, way out of my price range. His National Geographic article, Falconry, the Sport of Kings is still a favorite (illustration below ganked from The Internet Archive). 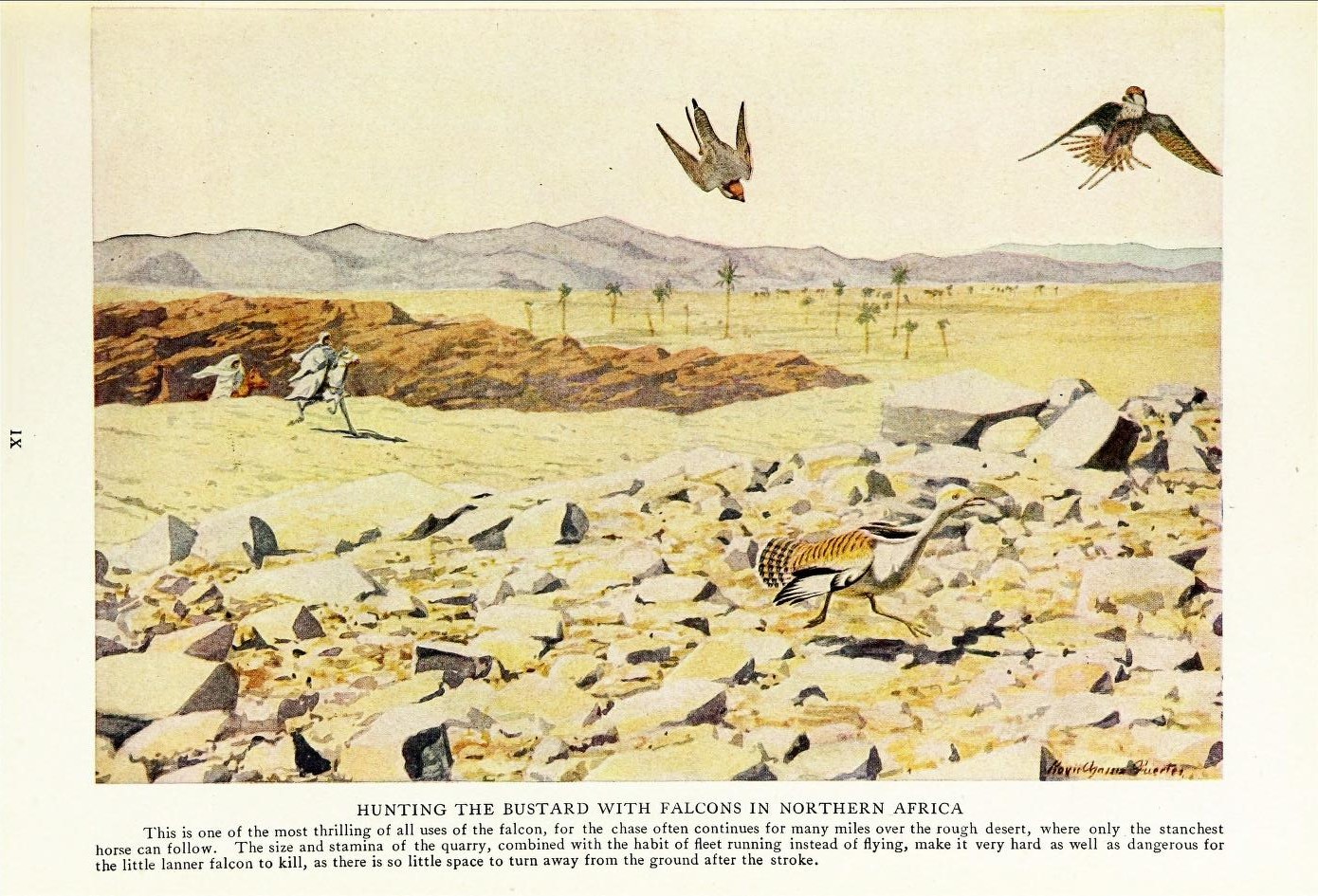 And a preliminary sketch for the illustration from Cornell’s L. A. Fuertes Image Database: 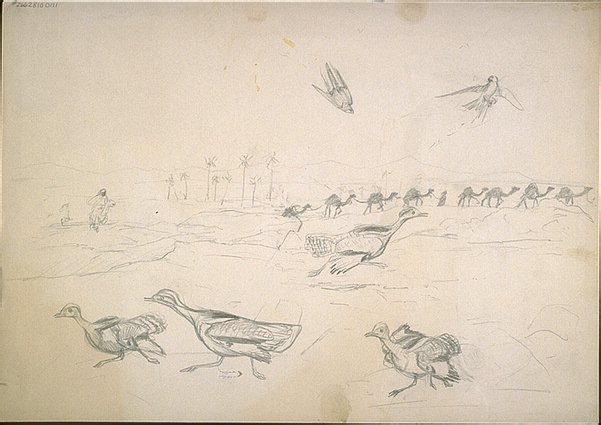 And Abyssinia. Because it successfully resisted during the scramble for Africa – and for many other reasons – it’s a fascinating region.

So, on with the show. I’m half tempted to post all the Fuertes paintings, but I’ll resist. A selection, with some notes:

Two that go well with the NatGeo illustration – the Lanner: 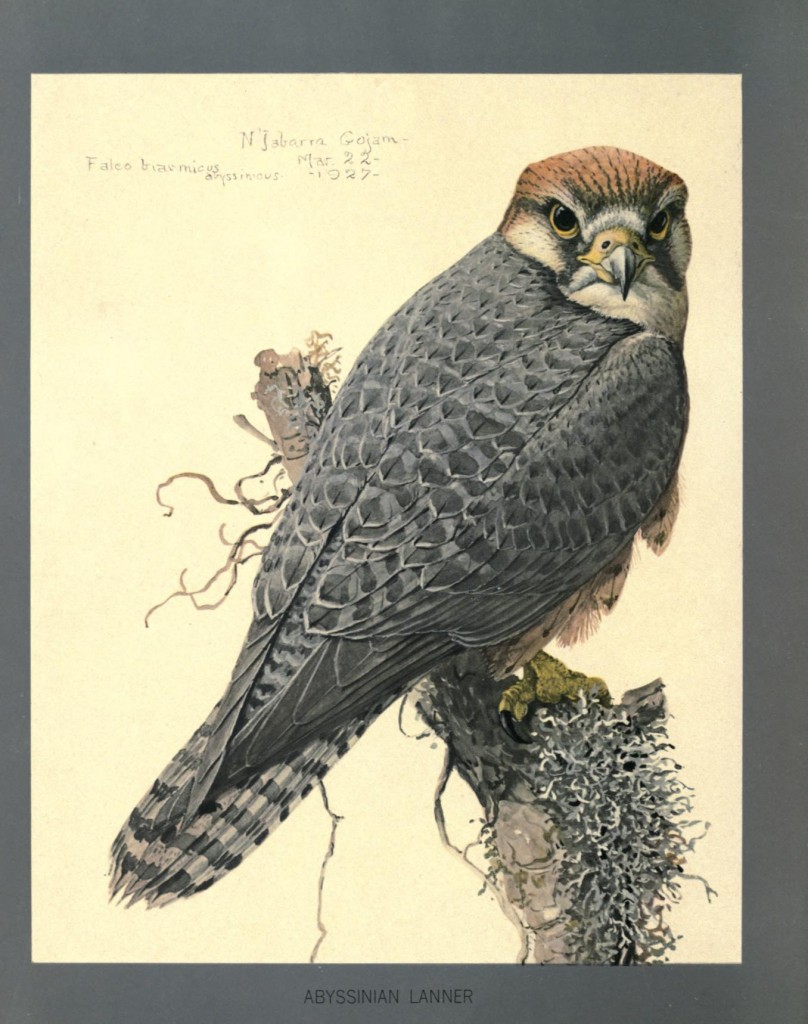 and the Black Bellied Bustard: 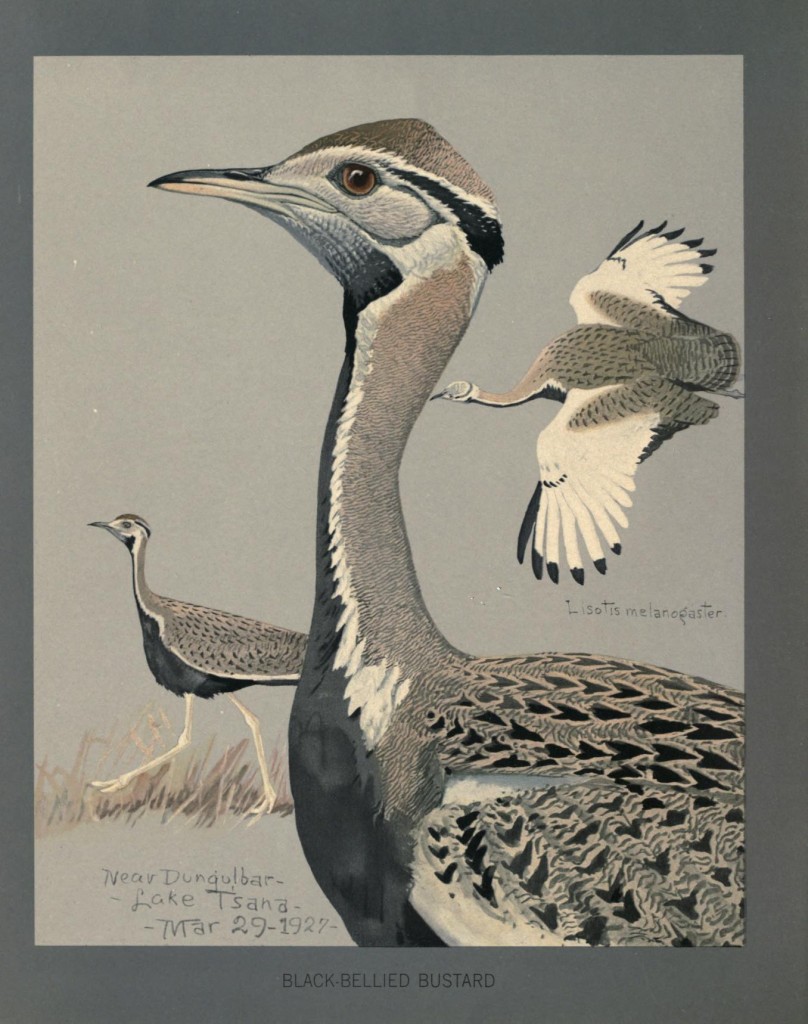 Because I love Hornbills, the Crested Hornbill (Darren/TetZoo on Ground Hornbills here): 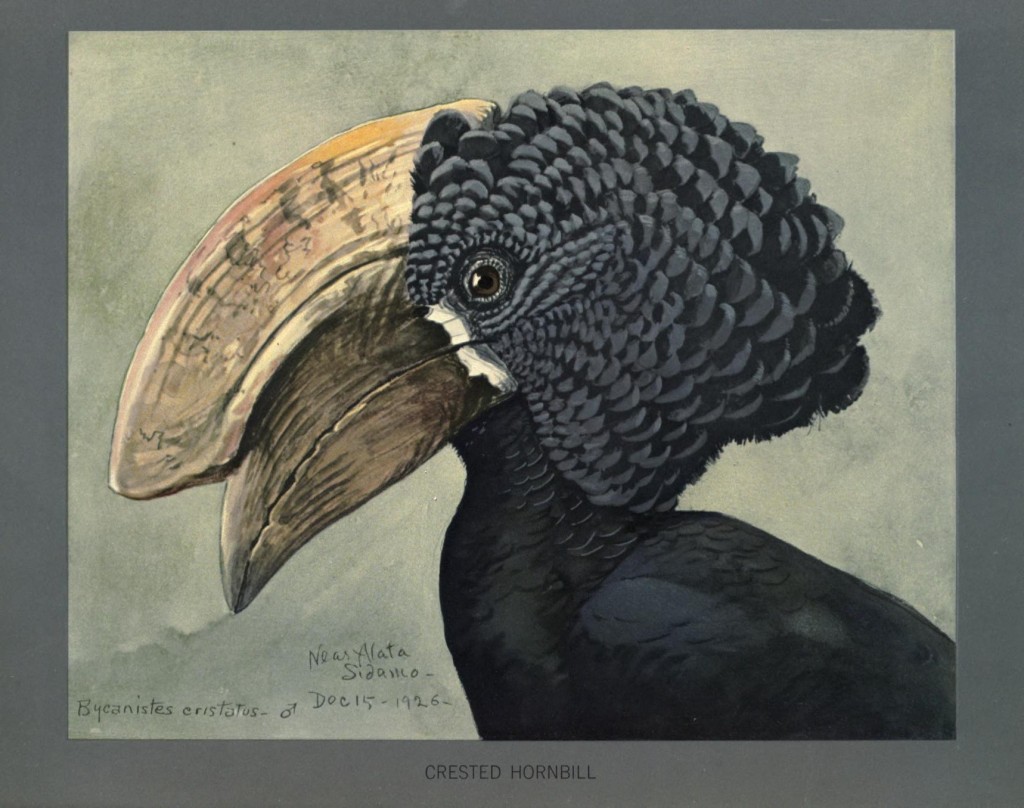 Lammergeiers use ossuaries. You’d like another reason to add them to your pantheon? Here you go. 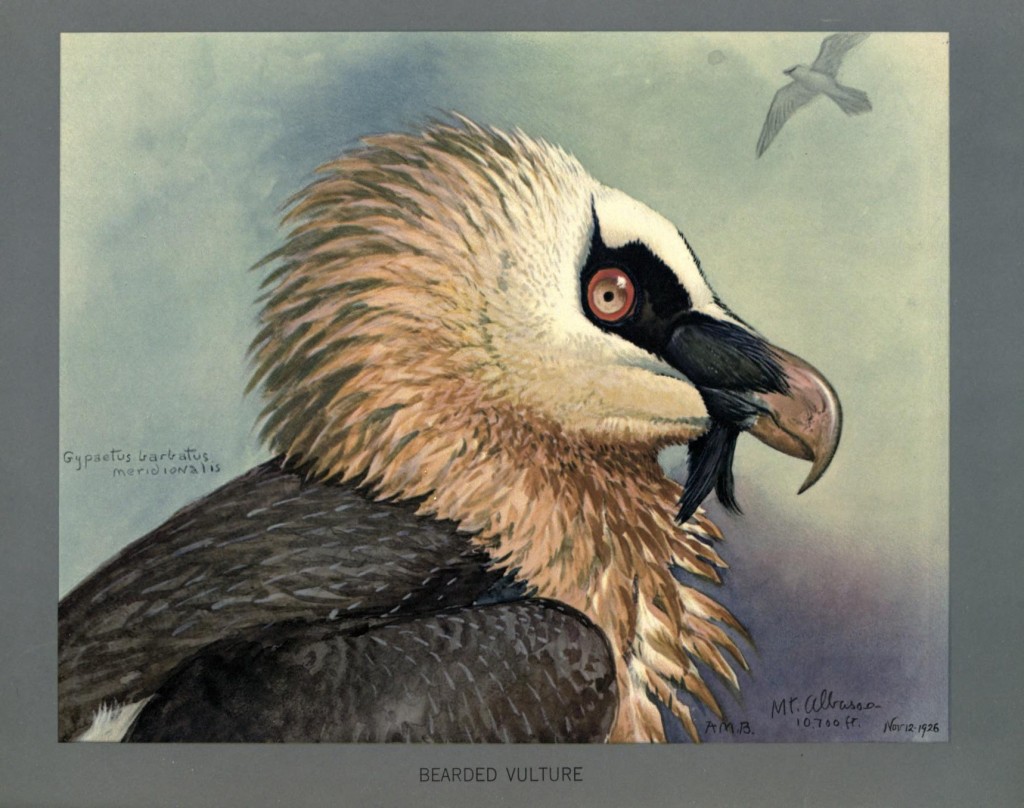 Neil Gaiman was in town recently on the American Gods 10th anniversary tour. As a result, ravens have been front and center in my imagination (if you don’t understand the connection, you really should read the book). Fuertes remarks that the Thick Billed Raven is “vulturine in habits” – pretty typical raven behavior. 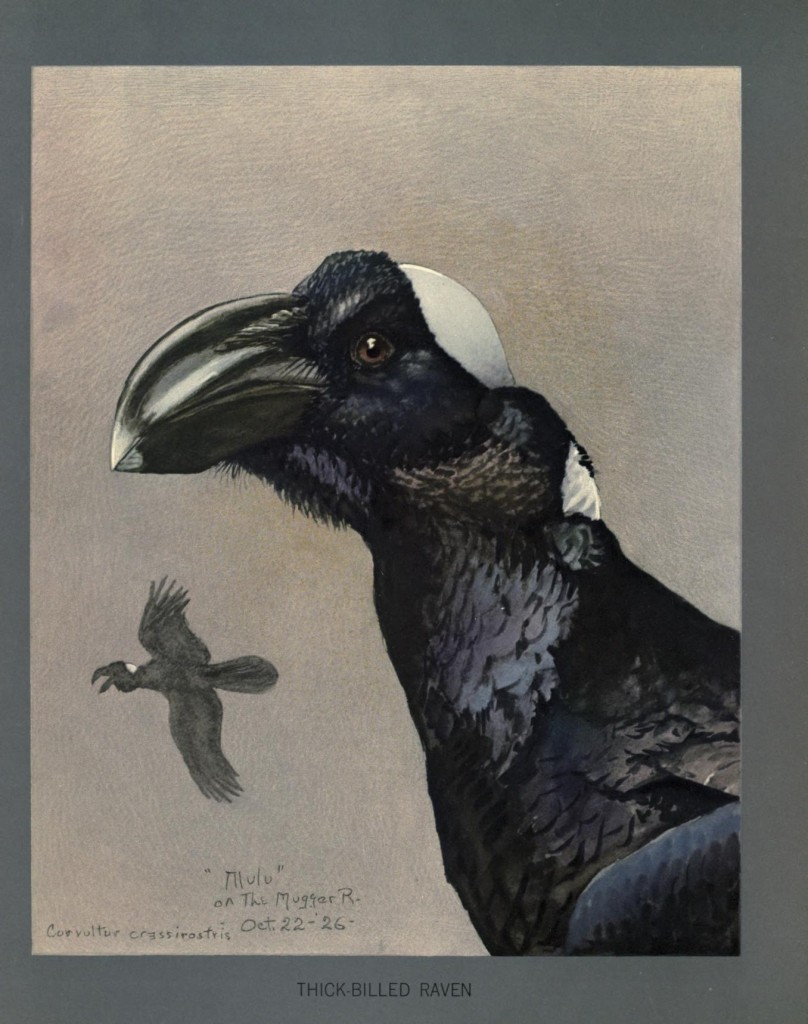 Waxing extremely vulturine, the badass of the carcass crowd, the Lappet-faced Vulture.

“They are the most powerful and aggressive of the African vultures, and other vultures will usually cede a carcass to the Lappet-faced Vulture. This is often beneficial to the less powerful vultures because the Lappet-face can tear through the tough hides and muscles of large mammals that the others cannot penetrate…” *

“Lappet-faced Vultures, perhaps more than any other vulture, will on occasion attack young and weak living animals…” * 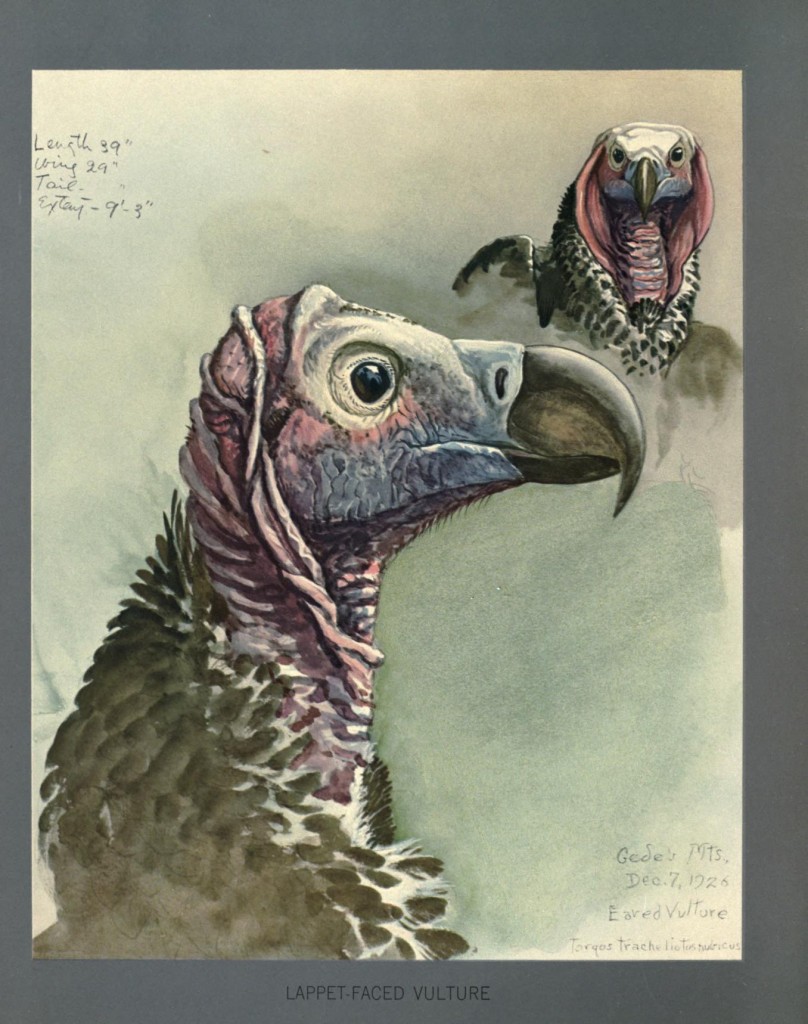 And last but not least, a canid that is often cited as a possible ancestor of the dog, the Abyssinian Wolf: 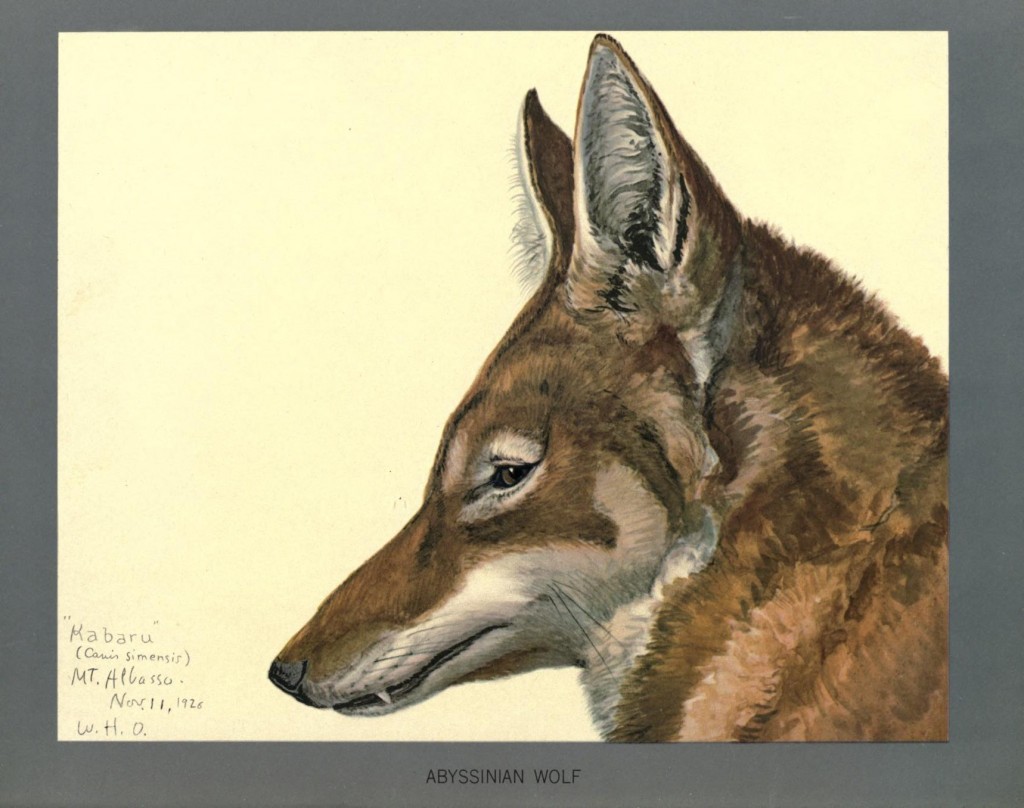 4 thoughts on “Fuertes and Abyssinia”