I just ran across an interesting New Scientist article on an Australian katydid that is an acoustic aggressive mimic.

Aggressive mimicry is a form of mimicry where predators, parasites or parasitoids share similar signals with a harmless model, allowing them to avoid being correctly identified by their prey or host. * 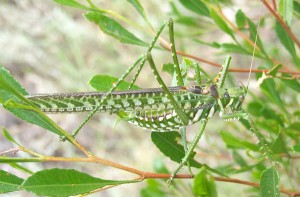 By 2008, Marshall and Hill had recorded more than 30 minutes of cicada-katydid duets. The songs varied from very simple with just one sort of cue to the virtuoso, with long introductory passages followed by complex cueing sections. Cues ranged from a simple isolated “tick” to a passage lasting nearly 2 seconds (see diagram). None of this seemed to faze the katydids. They could respond correctly to 22 of the 26 species tested, and for 18 of these, they got it right more than 90 per cent of the time (PloS ONE, DOI: 10.1371/journal.pone.0004185). *

And once again (flipping the bird in passing to a truly stupid idea) we see the dance of predator and prey driving evolutionary changes:

Marshall and Hill suspect that in the case of Cicadettini cicadas, predation could be one of the forces driving change, as they engage in a sort of musical arms race to outwit spotted katydids. “Some songs are very complex with short phrases that look like cues. Katydids click after them – but female cicadas never do,” says Hill. “These could be false cues to trick the katydid into giving itself away.” As katydids cotton on to the false cues, then the cicadas must lay more traps to keep one step ahead of their predators, speeding the rate of song evolution and perhaps explaining why some songs are so extraordinarily complex. *

For more aggressive mimicry fun, let me recommend, once again, Bruce Sterling’s saga of Photinus vs. Photuris: Luciferase (link is via the Wayback Machine, so formatting may leave something to be desired).