A week or so ago, I heard through the grapevine that the Shark Girl had been free diving with a group of Spotted Dolphins when a pod of Bottlenose Dolphins swept in and sexually aggressed the hell out of the smaller Spotteds (I’m deliberately not using the word I heard when we were talking about it – rape). I was, initially, really disturbed by the story – Flipper? John Lilly’s buddies? Thanks for all the fish? Rapists? WTF? My emotional reaction remains, but intellectually the story made me reflect on anthropomorphism and how little of the interior lives of other animals we understand. I have little doubt that inter-species aggression is not a good thing for the victim and perceiving it as a good thing would be profoundly maladaptive – beyond that, I’m not sure what to think. It sure wouldn’t be the first time that interspecies sex was used to express dominance – that foo-foo dog humping your leg is not in love with your shoes – the message is something else entirely.

With all this percolating in my head, I came across the work of Isabel Samaras in Juxtapoz. Her latest exhibition is called “Into the Woodz”:

I guess the theme is “Woodland Fabulous”!  When I started with the paintings of Goldilocks and Baby Bear I wanted to put in some nice solid visual clues so you’d know who they were without having to be told — there’s a bowl a porridge, some “Just Right” brand oats, and I gave Baby a big gold dookie rope necklace with a gold nameplate that said “BABY” on it.

I had been doing all these animal drawings in my sketchbook and had given some of them necklaces made from gold foil chocolate wrappers.

It suited him so well that I added a gold tooth with a diamond chip and a bling ring and Goldy got some huge gold doorknocker earrings.  I started pulling out old records I had from the 80s – Rob Base & D.J. E-Z Rock, EPMD, Salt-n-Pepa, Derek B, Kool Moe Dee, Sweet Tee and RunDMC.  Next thing I knew I was painting a porcupine with gold “love/hate” rings and a bunch of mockingbirds having a rap war sitting on a big boom box. 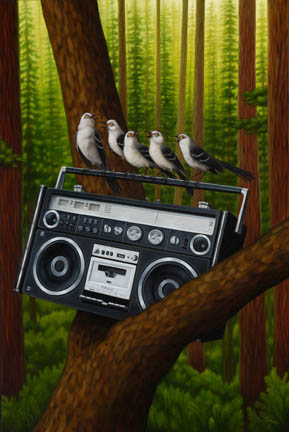 [I chose this one because I’ve heard of some urban mockingbirds greeting the dawn by imitating car alarms – life = art.  Dr. H]

The next piece was set deep among the trees and I just never left.  I became one of the girls who didn’t come out of the woods!  And I started to wonder ‘who else might be in there’?  Forests are wonderfully mysterious places—if you go to an intensely old one with massive moss covered trees you really do half expect to see a party of dwarves marching along or odd things springing out at you. They’re magical places.

In this case the animals are a bit “urbanized”—they’ve come into contact with human culture and taken a few things back into the woods with them. *

Some wonderful grist for my “we see our reflection in everything” mill. I don’t think it was specifically her intent (that’s why art doesn’t come with an instruction sheet), but the image of a squirrel with a rope and a gold nut really makes concrete for me the way stories and myth make animals avatars of certain human characteristics – for dolphins, the intelligent and peaceful  older brother. On a slight tangent, the painting on Isabel’s book calls another favorite artist to mind. 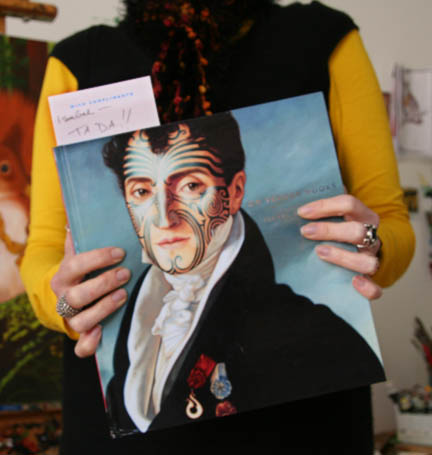 For folks who want more, Ms. Samaras has a blog and – as noted – a book.

When my Netvibes feed from Bibliodyssey popped up a new post with the title “A Cabinet of Natural Curiosities“, I couldn’t click over to Peacay’s place fast enough. In amongst the monitors and birds of paradise was this fellow: The birds look reasonable and I recognise the Flying Dragon, but I think Albertus Seba may have gotten a feejee mermaid style gaff as well – I’m not sure there are any Revelation lizards crawling/squirming/dragging around – but I could be wrong. That hasn’t stopped folks from rendering the Beast in Lego (h/t Tom B.). Let’s see… From delphine rape to the Whore of Babylon in Lego. Yep, that about covers it.