I’m reviving the blog with another in a continuing series: linked items that have appeared on my radar screen. First up are Ofelia Esparza, Daniel Hernandez and Dio de los Muertos.

“We all suffer three deaths.” Ofelia Esparza, the East L.A. altarista, or altar maker, was remembering her mother’s words. “The first death is the day that we give our last breath, the day that we die,” said Esparza one recent evening in Boyle Heights as she and her daughters prepared for Day of the Dead. They were making orange paper flowers, the blooms crinkling loudly, taking shape in their hands. “Our second death is the day that we’re buried, never to be seen on the face of the earth again, which sounds very final.

“But the most final, the most dreaded, terrible death of all,” she said, “is to be forgotten.” * 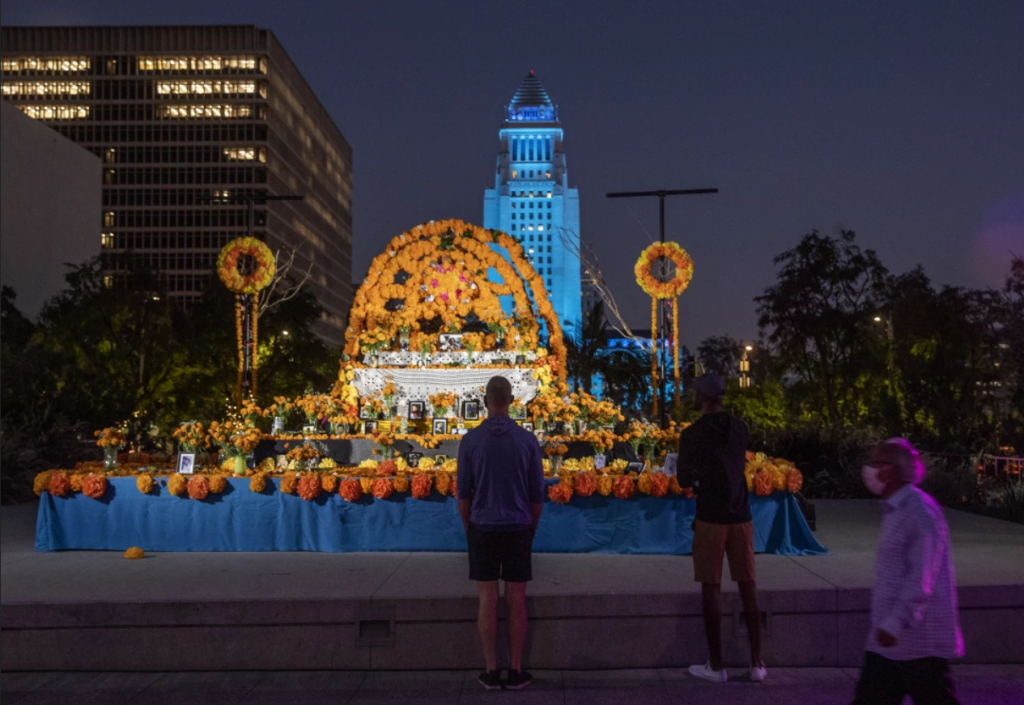 The idea of the third death hit me hard this year. Though I’ve been really fortunate – the pandemic hasn’t taken anyone close to me – the daily knowledge of loss has been at my elbow since March of  2020, when I bolted from the west coast to hunker down in New England. I don’t believe in an afterlife, but it’s clear we live on in the memories of others.

Mr. Hernandez notes the commodification of Dio de los Muertos; inevitable, given the logic of late capitalism. I’m heartened by seeing the way it’s celebrated by folks I respect: focusing on remembrance rather than branded tequila 😉 . I vote in favor of Anglos screwing up Cinco de Mayo (afaik, not an important day in Mexico anyhoo) and keeping the first days of November for our ancestors.

A day after reading the L.A. Times piece, I was driving around listening to the latest Aria Code. I like opera (blame Bugs – seriously), but in the most naive way possible. I rarely have any idea what’s going on and almost never know what the lyrics mean. Aria Code is a great listen for someone in my shoes. I don’t retain everything, but for the duration of the podcast the hidden depths are revealed and I love it. The ep I was listening to was “Potion, Emotion, Devotion: Wagner’s Tristan und Isolde“. It’s an exploration and explication of Isolde’s final aria: the Liebestod (literally lovedeath).

But what is actually going on at the end of the opera – Isolde is not talking about death at all. she never says the word ‘death’. It’s this hallucination of Tristan being still alive. … It’s not about death, it’s about life. it’s about the memory of a person whom Isolde is bringing to life in her own mind.  – Alex Ross, New Yorker music critic

So there you have it! Living on in the memory of others – the only reliable afterlife.