I have to agree with Dale Dougherty (guestblogging over at BB) – nothing enhances a Christmas tree like a loop of model/toy train track (model NEQ toy, but either one works). The comment thread on Dale’s post was a good one – among other things, I may try to make a pilgrimage down to the Tech Model Railroad Club sometime. The big discovery in the comments, though, was finding Tim Warris’ blog.

A good rule of thumb – in my opinion – is that edges and interfaces are where interesting things tend to happen. It’s true in the woods and it’s true when you’re talking transportation. Ships and trains are cool by themselves, off running along, but bring the two of them together and stick a Hulett unloader (I know – off topic) in the middle and things get very interesting. Both Tim and I have a copy of Where Rails Meet the Sea, a book largely about car ferry operations – rolling boxcars, etc., on and off ferries and barges. Tim is modelling the CNJ Bronx Terminal – a yard in about an acre with no connection to other trackage except via car float. Not only is the yard tiny, it is also quite complex. Check out one section that Tim has fabricated – no, you are not going to find switches like this at a hobby shop:

Definitely worth keeping an eye on and he’s going to be (sort of) in the area with the layout in January.

While we’re on the topic of interesting track work, I’m going to dredge up an oldie but goody – Austrian trickster-collective monochrom‘s Turing Train Terminal. Yes, a Turing machine implemented in model trains. The abstract:

Scale trains have existed for almost as long as their archetypes, which were developed for the purposes of traffic, transportation and trade. Economy and commerce have also been the underlying motivations for the invention of computers, calculators and artificial brains.

Allowing ourselves to fleetingly believe in an earlier historical miscalculation that “… Computers in the future may have only 1,000 vacuum tubes and perhaps weigh 1 1/2 tons.” (Popular Mechanics, March 1949), we decided to put some hundred tons of scaled steel together in order to build these calculating protozoa. The operating system of this reckoning worm is the ultimate universal calculator, the Turingmachine, and is able to calculate whatever is capable of being calculated. One just would have to continue building to see where this may lead…

I’m still digesting the paper this layout is based on (here – warning, PDF) – being a woodsman of very little brain, it make take a couple more passes – but what’s not to like? 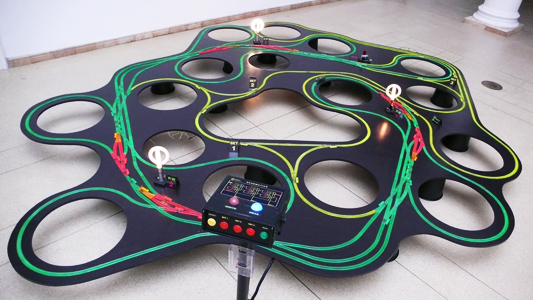