…has a Flickrstream (via Making Light) and, of course, a web site. If you’ve been under a rock or out of satellite range for a few weeks, a Saxon hoard was discovered in Staffordshire (Mercia) on July 5 by Terry Herbert (using a metal detector).

Let the crowdsourcing begin. A comment on the picture below:

You say these are stylised arms, are they not actually zoomorphs of Woden’s ravens? It is common to have back biting creatures and these two are clearly birds. The zoomorph of raven to hand could represent Woden reaching into the world of man through his birds.*

Other commenters are skeptical, but any reference to wolfbirds Hugin and Munin is a win in my book. 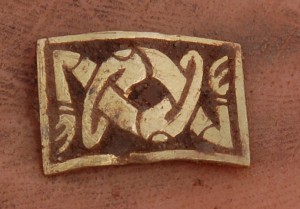 Definite zoomorph on a hilt.

For those whose thirst for Saxon objects is unslaked, the British Museum has Sutton Hoo info available on line.

One last personal bit. I can’t encounter British archeological artifacts without thinking of the year I spent in Wales as a child. We visited castles, Roman sites – you name it. My folks also got my sister and I a subscription to Treasure magazine. I loved the whole thing, but one of my favorite features was “The Wonderful Story of Britain” – Treasure also introduced me to The Borrowers, but that’s neither here nor there. 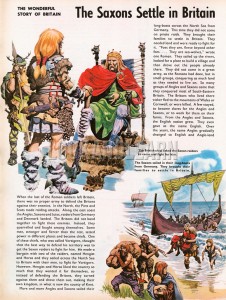