The Writing on the Ice

It’s difficult sometimes to trace the origin of a tangent. In this case, I’m pretty sure it started with the trailer for Mortal Engines, a movie I’d like to see in the theater, but who knows… The big mobile cities started me thinking about the big vehicles I’ve imagined taking part in the 2nd Miskatonic Expedition story – especially the Russian vehicle, which is a nuclear powered, screw driven monstrosity. From there it was a quick jump to watching a favorite monster movie: John Carpenter’s The Thing. Really excellent special effects; I remember a friend had a copy of Cinefex back in the day detailing how some of the monsters were created and it was fascinating. And from there it was off to the reading races. So here’s a list of the Antarctic stuff I’ve read over the past week or so, with a thought of two on each book. I’ll list them in order of publication, and indicate the order I read them in.

The Narrative of Arthur Gordon Pym of Nantucket (read 2nd) – Edgar Allan Poe The grandparent of all the antarctic horror to follow, this thing is a hot (cold?) mess. Poe thought of himself as a magazinist and it shows. Continuity is, um, uneven, the style and point of view are all over the place and it just stops in an “ok, we’re done now” cliffhanger (literally). But the thing that most walloped me was the racism. It’s both casual and thematic. Casual in the way Pym’s companion for the adventures, Dirk Peters, is described as having “arms, as well as legs, [that] were bowed in the most singular manner, and appeared to possess no flexibility whatever. [And a head that] was equally deformed, being of immense size, with an indentation on the crown (like that on the head of most negroes)…”*. Peters is supposed to be a “half-breed” with a Native Amreicam mother and a fur trapper (read: white) father. Early on, the brutality of the black cook on the Grampus (the first ship Pym is on) – he’s described as “demonic” – is singled out for emphasis. And thematically, the contrast between dark – the island of Tsala, where even the teeth of the locals are black – and the white figure at the end of the world is striking. With this in Poe’s oeuvre, I’m a little surprised that the orangutan is such a fraught topic: 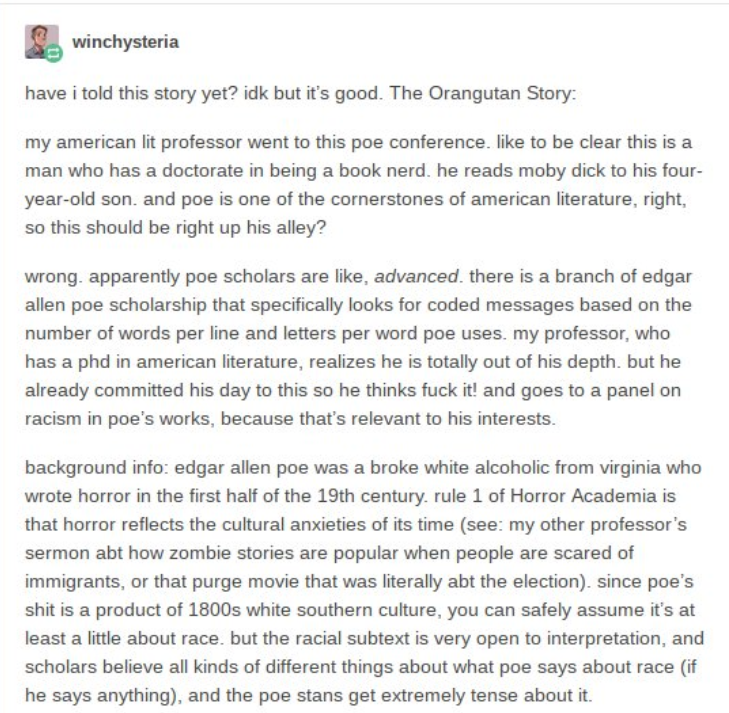 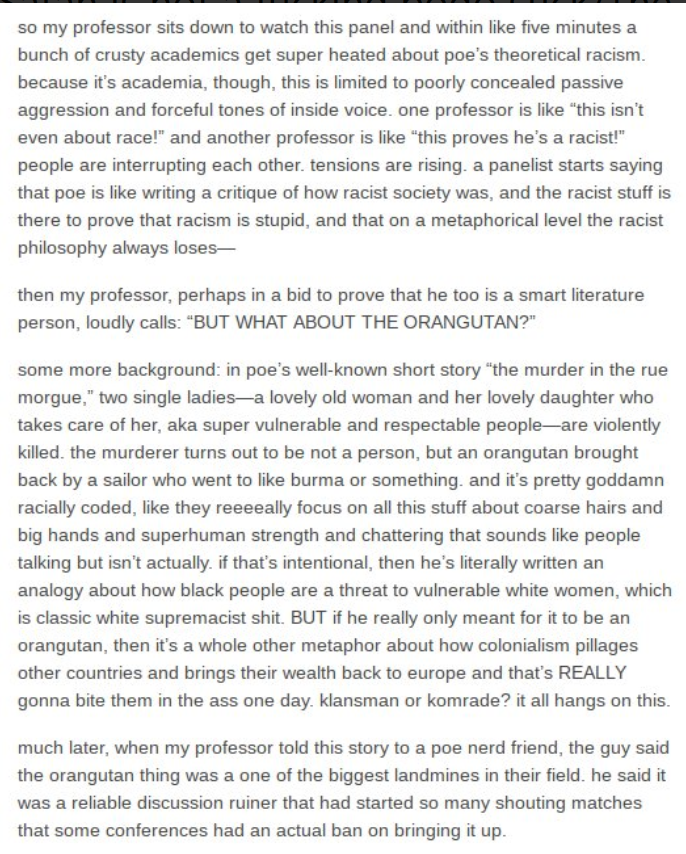 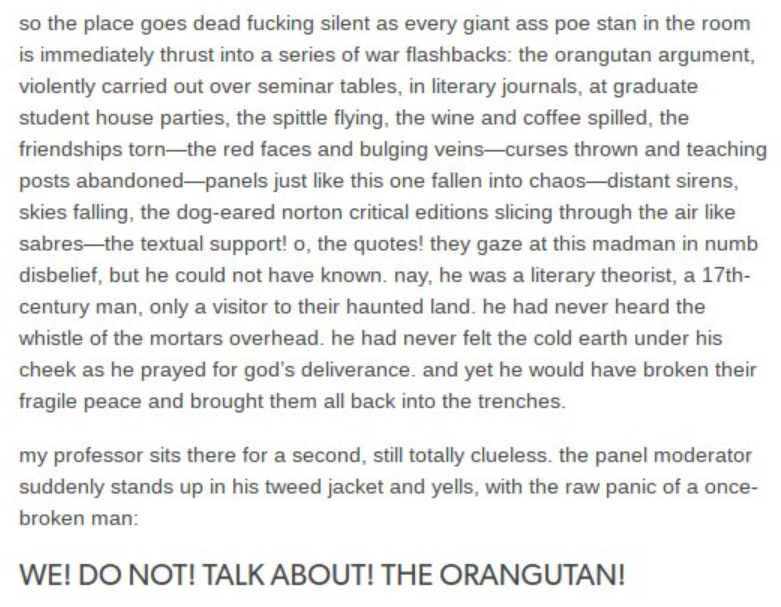 If you’re interested in reading The Narrative, Project Gutenberg has it here.

At the Mountains of Madness (read 1st) – H. P. Lovecraft If you know anything about Lovecraft the person, you know what a virulent racist he was (yes, there’s a through-line here, beyond the southern continent). As a result, it’s difficult for me to read the story of the Old Ones vs. the Shoggoths as anything other than a slave revolt. I suppose one could shade it a bit and, per rule 1 of Horror Academia above, see it as a working class uprising, but since the Old Ones bred Shoggoths – ownership of children being a key horrible feature of chattel slavery – I’m going to stick with my interpretation. And following some of Charlie Stross’ thinking on the Lovecraft mythos, I regard the Shoggoths as sentient biological bushbots: smart and endlessly reconfigurable. RUR meets Toussaint Louverture.

Pym (read last) – Mat Johnson I discovered this satire while reading the Arthur Gordon Pym entry on Wikipedia. It’s Poe inverted and skewered: the story of an African-American professor of literature who ends up with an all-black ice mining crew in Antarctica. I need to re-read it; strongly recommended. One note – it features Thomas KinkKarvel, painter of light, which makes me wonder if there’s more to learn about Cookie Puss and Fudgie.

Still to be read is Verne’s An Antarctic Mystery, but seeing as how Mat Johnson described it as “the most pragmatic and literal sequel to The Narrative of Arthur Gordon Pym and also the worst sequel. This is probably not a coincidence. Still, even a failed book is enjoyable on an occasional page. Come for the novelty, stay for the unbridled racism.”* I’m in no hurry.