Good coincidence in my nosing around today. This post on boingboing sent me (eventually) to a related couple posts on Mark Pilgrim’s new-to-me blog. Reader’s Digest version – Mark is moving to Ubuntu Linux after 20+ years of Mac use because of frustration with closed file formats:

I’m creating things now that I want to be able to read, hear, watch, search, and filter 50 years from now. Despite all their emphasis on content creators, Apple has made it clear that they do not share this goal. Openness is not a cargo cult. Some get it, some don’t. Apple doesn’t.

Here’s the bit of coincidence – I’m 30 or so pages into a new book by Charlie Stross – Glasshouse – and one of the bits of future history revealed early on is that the period from 1950 to about 2040 is a dark age – no one can figure out what went on back then, because no one can decipher the data format/media format/etc. mess (BTW – so far the book is a rippin’ yarn).

This issue isn’t a new one by any means – Neal Stephenson talked about it in his 1999 essay “In the Beginning was the Command Line”, and I worked in a place where we kept archived 7-track tapes in the tape vault (for legal reasons?) long after the last drive that would read 7 track G200 tapes was long gone. Still, it’s one of those things that makes you go, “hmmm…”.

PL: Saynte. Kanst thou beleve yt? Y totallye wantede to be a saynte. But thenne Y dide discouer that seyntez aren supposid to yive up the worlde and to spende their lives in werkes of devocioun and charitee. And so Y thoghte: “that sucketh” and Y decidede to be riche insteade. So nowe Y haue bought manye a beggare, who Y do feede at my cost, and eftimes Y do commaunde them to thanke and prayse me so that Y feele lyk a seynte – but Y kan yet swyve and drynke depe of wyn and snorte the poudre of cockayne, the whiche no Seyntez do. For telle me, litel man, who beth the patron seynt of cocayne?

GC: Ther beth none, my ladye.

I just got around to reading Bruce Schneier’s latest Crypto-Gram – it contains an excellent essay on the value of privacy.

Privacy protects us from abuses by those in power, even if we’re doing nothing wrong at the time of surveillance.

Too many wrongly characterize the debate as “security versus privacy.” The real choice is liberty versus control. Tyranny, whether it arises under threat of foreign physical attack or under constant domestic authoritative scrutiny, is still tyranny. Liberty requires security without intrusion, security plus privacy. Widespread police surveillance is the very definition of a police state. And that’s why we should champion privacy even when we have nothing to hide.

Later, he quotes Solzhenitsyn (I’m not wild about Solzhenitsyn’s Mother Russia reactionary crabbiness, but if anyone can talk about the surveillance/police state, he’s the one):

“As every man goes through life he fills in a number of forms for the record, each containing a number of questions… There are thus hundreds of little threads radiating from every man, millions of threads in all. If these threads were suddenly to become visible, the whole sky would look like a spider’s web, and if they materialized as rubber bands, buses; trams and even people would all lose the ability to move, and the wind would be unable to carry torn-up newspapers or autumn leaves along the streets of the city. They are not visible, they are not material, but every man is constantly aware of their existence…. Each man, permanently aware of his own invisible threads, naturally develops a respect for the people who manipulate the threads.”

A couple more – first, a couple orchids and my two bog containers. The purple flower is a Dendrobium and the yellow is a Brassia. There are a couple different Sarracenias in the bog containers – purpurea is the little guy(s) – I don’t know which species/cultivar the tall ones are. The tall Sarracenia has already bloomed – you can see the leftover – and the purpurea are getting ready to send up a buch of blossoms. 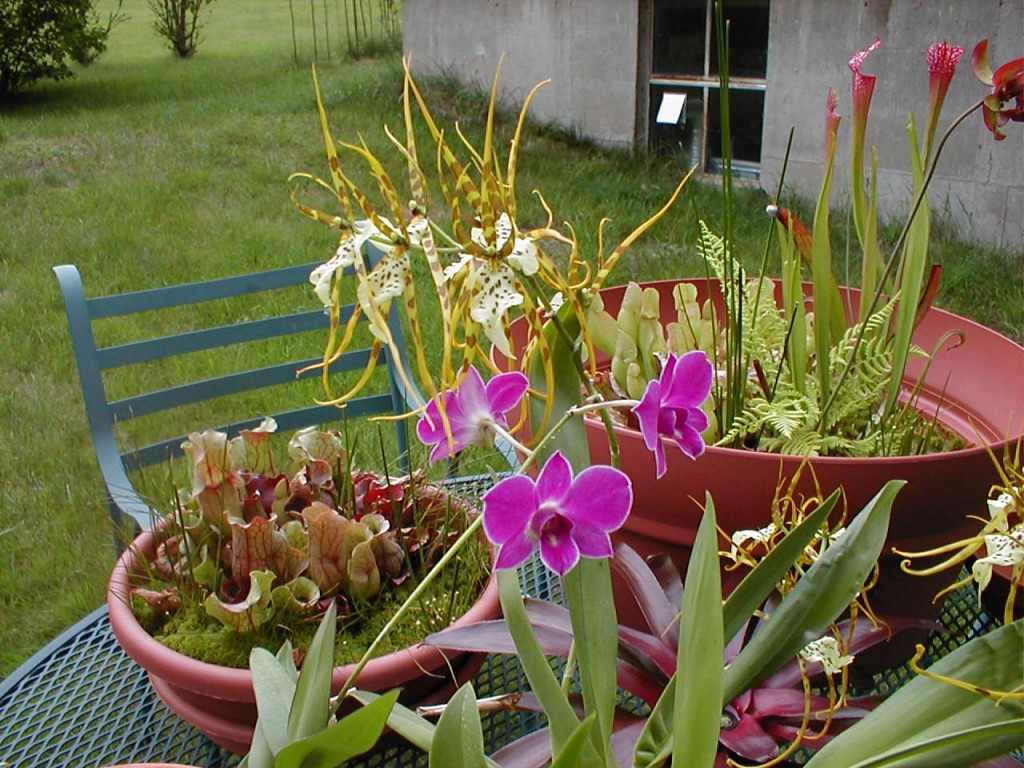 Not a flower (though it did flower recently) – Neoregelia “Grenada”. This bromeliad produced a pup this spring that I’m planning on using in a frog vivarium. I wish it would pup some more – it’s a nice brom…

Lots of stuff in bloom – both in the ground and in containers. Some of the containerized stuff:

My hardy water lily got off to a roaring start – even though it’s been wet and cool, it’s already produced a half dozen blooms. My goal of someday growing a Victoria (cruziana probably, though I’d go for amazonica if I could) remains. In the other whiskey barrel my lotus is getting started. Even relatively hardy lotuses seem to like to wait until the water gets nice and warm – I’m hoping I’ll have a ‘lotus in bloom’ picture later in the summer. 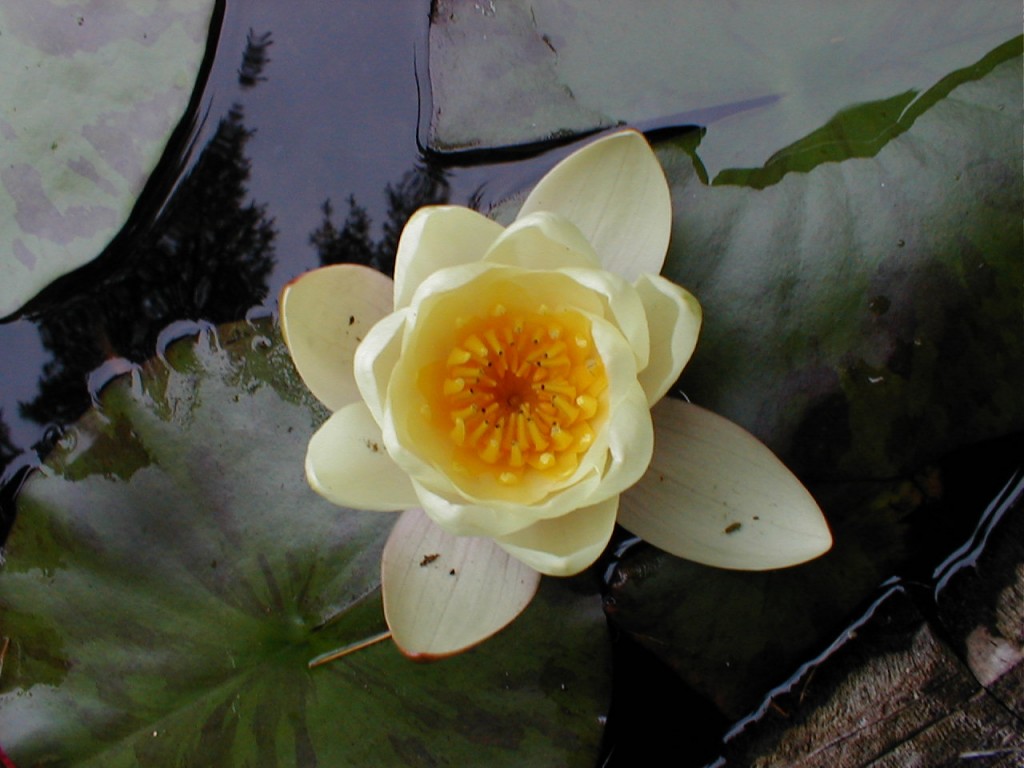 One of my orchid cacti got an early start as well. I have no idea what kind it is – I did a cutting trade at a bakery up north of the notches a couple years ago when I was up there for some bird hunting. The blooms last longer than they do on my other orchid cacti – 4 or 5 days as opposed to the 1 night bloom on my big white ones. 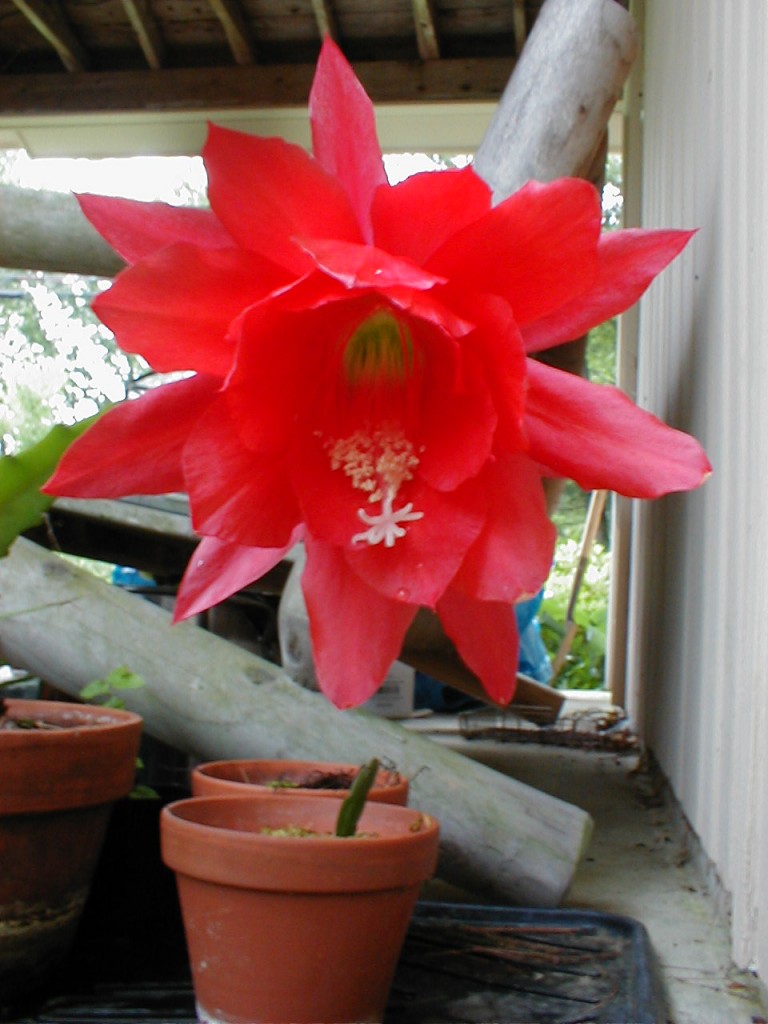 One of my favorite bloggers – Digby – hits a home run w/ this analysis of why privacy is so important; why it’s a key member of the set of innovations that made this country what it is.

But there is another aspect of this which is important, as well. Clinton’s privacy Bill of Rights includes a lot of consumer protections, which is something that I think is a truly sellable, populist idea. The intrusion into our private lives by government is a threat to our individual liberty. The intrusion (and collusion) by its ally, corporate America, is truly a threat to the fundamental definition of what it means to be an American. The ability to amass all this data and create profiles of us and put us into categories and label us as being one thing or another according to complex formulas, means that the great innovation of America — the ability to reinvent ourselves and take risks — will no longer be optional. The great nation of immigrants and hucksters and innovators will become a stratified society based on criteria that has nothing to do with our potential and everything to do with our past.

This is important stuff – we seem to edge closer to a technological panopticon every day – if we let them build it, they’ll use it.

I’m sure that this (me putting up a blog) signals the death of the medium – regardless, here’s the canonical ‘hello world’. Here’s a link that should start to explain my nom de guerre…